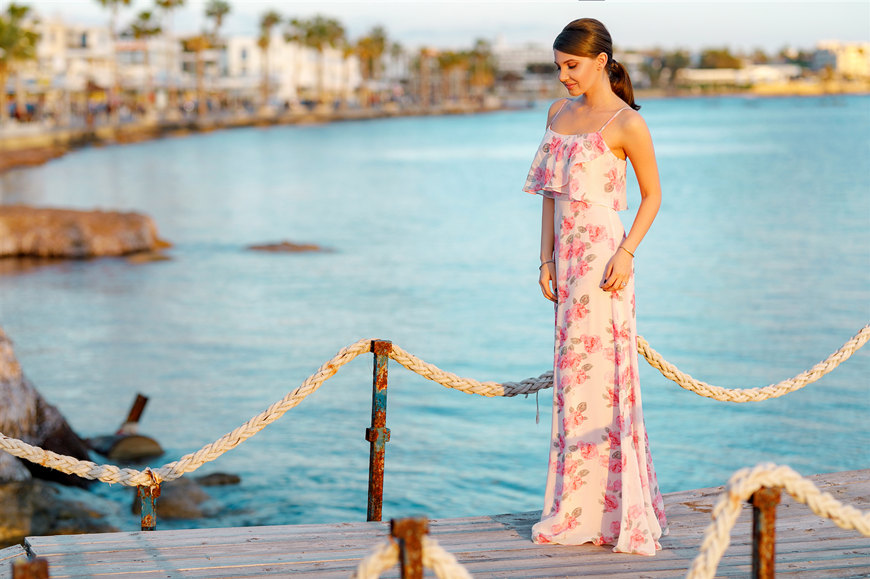 Cyprus is a popular tourist destination with its endless blue-sky days and miles of sandy coast. Our Ever-Pretty beauty Larisa recently visited this gorgeous island and took some gorgeous photos highlighting the beauty of this island nation. While she was there the weather was so perfect that Larisa could stroll the streets of Limassol peacefully while wearing our pink floral Ever-Pretty dresses. Limassol is a city on the southern coast of Cyprus and has been ranked by TripAdvisor as the 3rd up-and-coming destination in the world, in its Top 10 Traveler’s Choice Destinations on the Rise.

The maxi dresses Larisa wore in this trip all feature the same pink rose print but are different silhouettes. The bright color and light fabrics are designed for this location and it showed. Whether wearing for a wedding or a holiday, these beautiful blooms will surely put you in a brilliant mood!

Larisa also enjoyed the sea breeze in Paphos which is a coastal city in the southwest of Cyprus and is included in the official UNESCO list of cultural and natural treasures of the world’s heritage for its spectacular ancient remains, and was selected as a European Capital of Culture for 2017, along with Aarhus.

When it comes to local cuisine. Larisa highly recommends Moussaka, Kleftiko and Koupepia which take ingredients and flavors from signature Greek and Turkish fare.

Moussaka is baked in layers of eggplant and lamb, covered in white sauce which was made with butter and flour cooked in milk.

Kleftiko is a traditional lamb dish which is cooked for minimum of 24 hours in the clay oven while it marinates in a mixture of lemon juice and cinnamon.

What do you think? Is Cyprus on your travel bucket list now? When you’re ready to pack for this spectacular destination, you can shop Larisa’s look below.

3 responses to “What to Wear on a Vacation to Cyprus”

Check out your next stunning look now!!! 😍😍

Cool, gentle, gorgeous… Fall in love with these